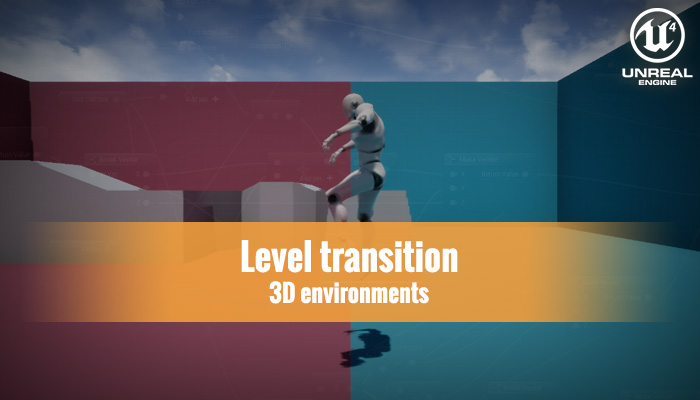 We need to do a few modifications in this characters, the first one is to add a Spring Arm and attach a SceneCapture2D component.

To maintain the orientation of this camera independent of the character orientation we need to disable the inheritance of pitch, yaw and roll in Camera settings

The SceneCapture2D is like a camera that we can put into the level to obtain a texture of what the camera is seeing. We have used this component previously in the Niagara particle system tutorial to make a heightmap texture of the scene.

We need to output the texture target of each character SceneCapture2D to be used in the transition material.

The basic idea is to obtain a render texture of the view of both characters and apply the screen transition from one texture to the other using a material.

To control the progress of the mask we can use a sine formula.

Multiply the mask to one screen texture and a negative mask to the other, in the last node add the results of apply this masks.

In the initialization of the material we need to pass the textures of each character scenecapture2d to the correct texture reference of the material.

This material can be used in a plane mesh in front or a camera, or in a Widget component image covering the screen, to render the effect during the transition.

After the transition switch to the camera of the destination character and disable the other character.